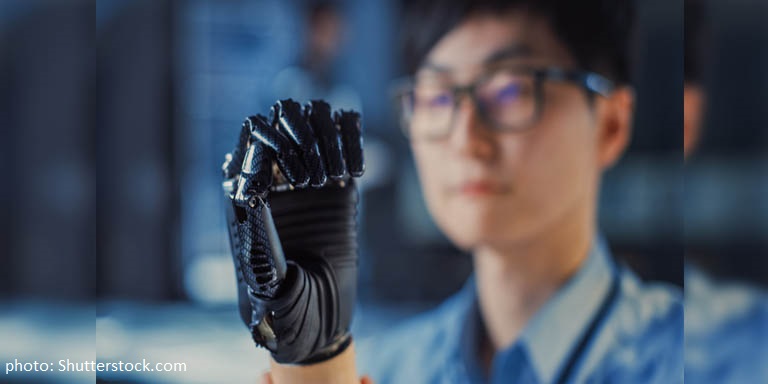 Cyborgs are taking on more human characteristics – but the reverse can also be true, a Japanese automation show indicates.

Discerning attendees at the most recent edition of Nepcon Nagoya, a major Japanese biannual electronics exhibition, no doubt came away with a fairly firm grasp of the key automation, robotics and smart technology trends that are set to reshape their respective sectors in the year to come. Held in Tokyo in January and in Nagoya – the largest city in central Japan – in September, its latter manifestation highlighted that, while everyone may be focused on the rise of automation, related technology (including advanced sensor arrays, smart connectivity and rapid data processing) is now increasingly being incorporated into more human-centric work practices. Indeed, as technology becomes more anthropomorphic, it could equally be argued that humans are becoming more cybernetic.

As might have been expected, there was considerable interest in autonomous cars on the part of many exhibitors and attendees. Despite that, it seems fair to say that it is a sector with plenty of hurdles still to clear, with many displays showcasing ideas or products marooned at the development stage. The presentation by Ascent Robotics, a Tokyo-based AI start-up, was no exception.

Outlining quite why his company was committed to designing an AI system capable of building a map and localising it in real time, Rika Nakazawa, Ascent’s Strategy and Marketing Officer, said: “This means it will have the ability to analyse live data, which means it could go places where high-definition maps are not yet available.”

At a more imminently practicable level, several exhibitors were showcasing robots that were already on sale. Many of the newer models were aimed squarely at smaller businesses, as opposed to the larger factories that have long been the traditional users of such systems. This may be because many of the tasks these latter-day droids now routinely perform would not have been cost effective just a few years back.

Odense-headquartered Universal Robots, for instance, had on offer a range of robotic products designed to be easily integrated into a variety of different working environments. Outlining their ubiquity, Nobutaka Mizuno, the company’s Sales Development Manager, said: “Cobot, our collaborative robot, can be used in any kind of industry. In Japan, our primary targets are [small- and medium-sized enterprises] – partly because Cobot doesn’t require the use of any protective screen or any other infrastructure and it can be run off a standard power source. With applications in manufacturing, assembly and laboratories, most businesses could recover their initial outlay within two years.”

An even clearer picture of just how robots are set to proliferate within the workplace came courtesy of Tatsuta Co, an Osaka-based machine and parts manufacturer. This year, the company was particularly looking to highlight its wide range of modifiable robotic attachments, add-ons that make it possible for machine systems to pick up and manoeuvre all kinds of objects, including boxes, cans and food items.

Demonstrating how a robot arm could use a double-lipped silicone fitting to pick up a bag of rice, Sales Representative Asami Seiwa said: ““This one is using air suction to grip the bag. It’s a very clean way to lift things and can be used for medicine or food processing.”

Among the materials used in its construction are sponges, silicone, polyurethane and NBR – a kind of synthetic rubber containing iron particles that can be relatively accurately monitored by sensors so any tears can be easily detected. Despite such sophistication, these attachments remain extremely affordable, with prices typically running from US$15 to  US$70.

Just as these attachments are giving robots a more human-like grip, however, other developments have seen human workers integrated more directly into automated processes. Hagiwara Solutions, a Nagoya-based flash-storage manufacturer, for instance, had on offer a range of tools designed to deliver data directly to workers. These included headphones that provide synced instructions and goggles where small diagrams and other required information can be displayed via their lenses.

Explaining the use of the US$250 goggles and the slightly-cheaper headphone set, Field Application Engineer Noriaki Suzuki said: “The data tells the worker where to find things – which part of a machine to open, what to look for and how to replace something. It’s basically a communication tool and acts to smooth the overall working process.”

A different variety of guided tool – a torque wrench that measures the pressure exerted on it and then warns its human operators if it is being deployed inappropriately – was being showcased by Sanyo Machine Works, a Nagoya-based specialist in the automation sector. Highlighting the benefits, Yuki Takeda, the company’s New Product Director, said: “The wrenches can sense if unsuitable pressure is being applied to them and can then trigger an alert that prevents damage and breakages.”

With both Mr Takeda and Mr Suzuki emphasising that such equipment also facilitated centralised management and time-and-motion studies on the efficiency of workers, highlighting areas where productivity could be increased, it was clear that their adoption might not be universally welcomed. Indeed, there are already clear signs that many workers’ rights organisations are keeping a wary eye on such developments.

However, it could be that yet more automation could stop any such labour-management disputes from escalating. Indeed, WingArc, a Tokyo-based data-management company, had high hopes that its Motion Board – an automated system designed to keep in-factory friction to the barest minimum – may do just that.

Explaining the thinking behind the system, Ryohei Tamura, the company’s Manufacturing Solutions Officer, said: “It’s very much IoT-based – we use an array of small sensors ensuring that we can detect any problem very quickly, with very little investigation required. It is here, however, that our understanding of factory working dynamics comes into play.

“Typically, the maintenance staff – the technical experts – don’t like being told what needs doing by management. In order to minimise any such flashpoints, maintenance staff interact directly with the Motion Board, with precious little management involvement. If there is a problem, the guys on the ground floor can go directly to the machine, access any previous comments and details of any historic issues and then provide their own updates. All the while, the factory managers can remain wholly hands-off.”

At present, the system is said to be finely tuned to the cultural environment of Japanese factories and, as a result, has only been rolled out in the domestic market. This, though, is about to change, with Mr Tamura indicating that a number of WingArc’s Japanese clients now have plans to implement the system within their overseas production facilities later this year.

While it’s inevitable that technical developments dominate expos in this particular sector, such shows also act to highlight the ever-greater international interdependence that seems to be the by-product of such ongoing progress. In keeping with this, Kinwong, a Shenzhen-based printed-circuit-board (PCB) manufacturer, was making its debut at the event with a view to capitalising on the needs of Japan’s rapidly expanding tech sector.

Detailing the changes the market has undergone over recent years, Kent Wang, Kinwong’s President, said: “As suppliers, we have been doing very well in many of the European markets for more than 10 years now. Up until maybe three or four years ago, though, the Japanese market was off-limits to Chinese PCB manufacturers.

“Thankfully, things have changed – largely because the quality of Chinese PCBs has improved, while the level of utilised technology is also far higher. It is this combination that has seen the Japanese market open up to mainland PCB suppliers.”

The autumn 2019 edition of Nepcon Nagoya took place from 18 to 20 September at Portmesse Nagoya.

Tech to Connect 4.0 – Robotic Applications: Next Level of Automation