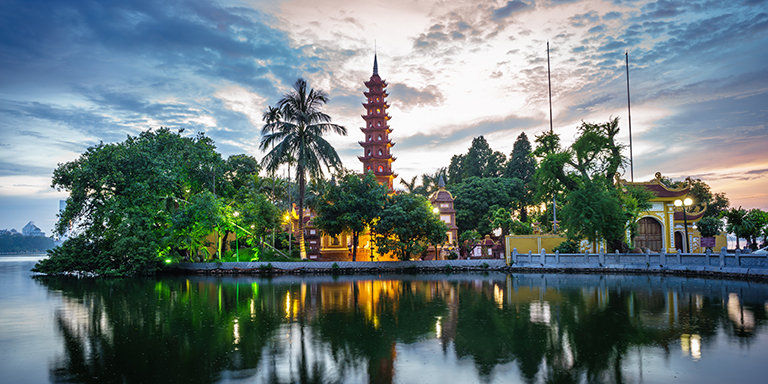 Most business leaders in the Guangdong powerhouse see bright prospects in the rapidly developing ASEAN bloc.

Like an hourglass neck, Hong Kong links the giant regions of Northeast Asia and Southeast Asia. The quantity of sand running through the channel has fluctuated over the years as regional economies have waxed and waned, but rapidly rising prosperity means that recently the flow of sand has turned into an avalanche.

To handle the surge, Hong Kong needs to expand, and it is doing just this by increasing its integration with neighbouring cities through the Guangdong-Hong Kong-Macao Greater Bay Area (GBA).

Close to 60% of companies in the GBA are considering further expansion into Association of Southeast Asian Nations (ASEAN) countries in the next three years, a research report by UOB Hong Kong Branch and the Hong Kong Trade Development Council (HKTDC) indicates.

The report, titled Trade and Investment between GBA and ASEAN and the Roles of Hong Kong, also found that GBA companies place a high value on Hong Kong’s services – which include banking and finance, legal, dispute resolution, IP-related services, MICE (meetings, incentives, conferencing and exhibitions) services, logistics and supply chain management, sales and marketing, as well as research and development – and expect the city’s role as a business hub facilitating trade and investment between the two regions to grow in importance.

Among the 10 ASEAN countries, Singapore, Malaysia, Vietnam (main picture), Thailand and the Philippines are the most popular trade and investment destinations. In the next three years, most of the GBA companies will choose Singapore (55.4%), Malaysia (53.0%) and Vietnam (51.1%) as markets for sales, while Vietnam (14.5%), Thailand (10.4%) and Indonesia (8.1%) are the preferred production or sourcing bases. Another 10.4% of the GBA companies also preferred to set up their regional offices in Singapore.

The GBA companies surveyed said ASEAN countries’ cost-effectiveness, abundant resources and huge markets are the key pull factors. Those in the industrial goods sector expressed the greatest interest (6.56 out of 10) in expanding their business further in ASEAN. This was followed by companies in real estate, hospitality and construction (6.21), as well as the business, professional and financial services sectors (5.71).

Christine Ip, CEO – Greater China of UOB, said: “Cross-border trade and investment flows between ASEAN countries and the GBA are driven by the two regions’ increasing interconnectivity and collaboration in areas such as sustainable development. At UOB, we are committed to assisting companies in capturing overseas business opportunities through our deep sectoral expertise, strong local talents and our extensive footprint in Southeast Asia. Over the past 10 years, the UOB Foreign Direct Investment Advisory Unit has supported more than 3,500 companies in their cross-border investments, of which about one-third are Chinese companies.”

Nicholas Kwan, Director of Research, HKTDC, said Hong Kong must further foster its interconnectivity with other GBA cities and ASEAN countries in order to boost its role in facilitating two-way trade and investment flows.

He said: “When the pandemic subsides and border controls relax, cross-border trade and investment will be more active. GBA companies must reconnect with overseas buyers and partners quickly. Being a trade-fair capital and business hub in Asia, Hong Kong can help GBA companies fortify ties with their counterparts in ASEAN and promote trade between the two regions.”

The research also showed that GBA companies value Hong Kong’s role in the region’s collaboration with ASEAN countries, giving the city an average score of 7.33 out of 10. Almost half (47.2%) gave a score of eight to 10.

Respondents hope that within the GBA, Hong Kong can be a one-stop business centre (41.6%), provide a simplified and harmonised tax system (38.7%) and offer more diversified investment products and services (38.4%).

In addition, respondents said MICE (45.4%), sales and marketing (41.4%), logistics and supply chain management (39.0%) as well as financial services (37.7%) are the most frequently used services in Hong Kong. Respondents are highly satisfied with the level of services and said they will use more of these services in the next three years.

For their overseas expansion into ASEAN countries, GBA companies look to Hong Kong to provide more comprehensive information, services and support (40.9%). They also hope public bodies or regulatory institutions can do more in facilitating trade and investment flows with their ASEAN counterparts (39.4%) and formulate policies to further open up regional trade and investment (39.1%).

Mrs Ip said that as international financial centre with a strategic location within the GBA, Hong Kong can further enhance its role as an essential bridge for GBA companies when they expand into ASEAN countries. “UOB’s dedicated Greater Bay Area team in Hong Kong also plays our part in helping GBA companies understand and appreciate the diversity of the ASEAN markets to capture more regional business opportunities,” she said.

The Trade and Investment between GBA and ASEAN and the Role of Hong Kong report is based on a survey conducted by the HKTDC from July to September 2021 with 657 GBA-based companies from various sectors. These included consumer goods, industrial goods, business, professional and financial services, real estate, hospitality and construction, as well as technology, media and telecommunications. In-depth interviews were also conducted with some respondents to understand the opportunities and challenges they faced in their business expansion in ASEAN countries, as well as their views on Hong Kong’s roles in promoting trade and investment between GBA and ASEAN. The full report in Chinese can be downloaded from the websites of UOB Hong Kong and HKTDC.