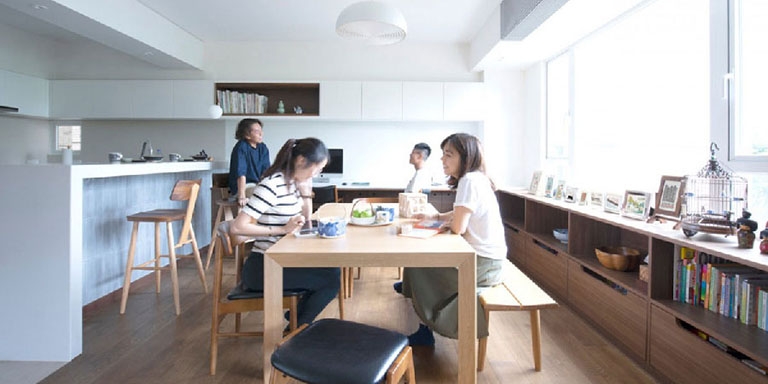 A creator of unique interiors draws inspiration from as far afield as Japan and Scandinavia.

Interior design harnesses all the senses, incorporating spatial layout and arrangement, functionality and aesthetic design to create pleasing spaces. Designers also need to pay close attention to factors such as materials, lighting, scent and furniture. For Hintegro, a Hong Kong-based studio, interior design is also a process of creating positive and beautiful experiences for its clients.

Founded by interior designer Keith Chan, Hintegro has spent a decade on projects spanning residential and commercial buildings as well as furniture design. Since his youth, Mr Chan has held a passion for Chinese calligraphy and painting. Later, while studying at Hong Kong Polytechnic University, he became deeply inspired by Japanese culture and the lifestyles of Scandinavian countries. Mr Chan has also spent time in London over the past five years and the result of these diverse influences is a distinct combination of Eastern and Western lifestyles with strong storytelling elements, underpinned by his deep immersion in aesthetics.

The name of the studio, “Hintegro”, hints at his design philosophy, combining “Hin”, Mr Chan’s Chinese name, with “intergro”, a homonym of mathematic “integrals”. He believes design is a process of breaking down problems, going through a rigorous thought process and integrating different elements to eventually arrive at a solution.

One of Mr Chan’s clients is a businesswoman who often travels around the globe for business, moving between Hong Kong, Japan, the United States, France and the Netherlands. “Which one do you consider as ‘home’?” he once asked her. She answered that home is wherever her mum stays,  because her heart is always with her mum, her cooking and precious childhood memories, which provide a sense of security. In response, Mr Chan gave priority to creating a warm and homey vibe for this particular client.

Through genuine communication with customers, Mr Chan and his team always strive to understand the needs of clients and the emotions that are deeply rooted in their hearts, articulating those needs through customised designs.

Mr Chan recalled a project in which he worked for a disabled client, who was referred by one of his friends. After transforming her home, installing full automation, the client sent Mr Chan a message: “I can finally control the temperature of the air conditioning – I feel like I’m on top of the world!” she wrote. He says the positive impact interior design has on the lives of his clients is what keeps him content and motivated.

Mr Chan believes style decisions should belong to the end users rather than the designers. Using their professional judgement, interior designers balance aesthetics and functionality to fulfil clients’ needs. The greatest mission of design, he says, is to elevate people’s quality of life.

Born and raised in the 1980s, Mr Chan has been greatly influenced by Japanese culture. In addition to the country’s pop culture – such as movies, music, fashion and animation – he learnt about the leading Japanese architects and designers while studying and still subscribes to Japanese magazines to keep abreast of up-and-coming design trends. He sees Japan as a role model that Hong Kong can look up to and gain an understanding of the importance of revitalising local artisanship and craftsmanship.

In line with the increasing awareness of cultural preservation, Mr Chan has had more opportunity to apply the essence of Japanese craftmanship, culture and wisdom to his projects. Since 2016, he has been working closely with Japanese furniture factories and design houses on crossover collaborations.

A recent client turned out to be a big fan of Japanese culture and the special chemistry with the studio led to a crossover design project using Japanese building materials, products and furniture. Starting from the hallway, the lower half of the wall was created using naguri, a traditional Japanese wood-shaving technique, to form intricate patterns on the surface. The team paired it with a foot light to highlight the beautifully crafted wood textures.

Entering the house, visitors see a shoji – a traditional Japanese room divider – that was designed in Hong Kong and made by KITOTE, a shoji factory in Wakayama. Before the COVID-19 outbreak, the team visited the factory to exchange ideas and coordinate on the production. The client also sourced a tochigi wood slab from Japan under his own initiative and worked with Mr Chan’s carpenter friend, who turned the slab into a wooden shelf next to the shoji and another in the kitchen, as well as a doorbell.

The team has also applied its cross-culture approach in another project, blending Japanese design and Scandinavian lifestyle elements in a recent penthouse project. In terms of layout, the team took reference from the Katsura Imperial Villa in Kyoto and adopted its “blur-the-boundary” concept to accommodate the client’s need for flexibility in the space.

Taking down the wall between two bedrooms opened up the space and turned it into a sitting room and a multi-functional room, divided by a sliding door with a metal frame in charcoal colour. The multi-functional area can be transformed into a living space or a guest bedroom. In the bedroom, meanwhile, the team furnished the headboard with a Shikkui diatomaceous plaster wall that looks harmonious and also works well in Hong Kong’s humid weather. The team selected furniture from Japanese brands, with a dining table and bench from Nagi by Fuji Furniture in Hokkaido, dining chairs from Seoto and an armchair by Hida Sangyo, as well as tailormade wooden shelves and other furniture items, aligning with the client’s lifestyle needs.

Sharing similar oriental cultures, values and living habits, Mr Chan firmly believes there is still great potential for Japanese furniture and building materials in the Hong Kong market, such as those produced by the Woodwork furniture brand. On a visit to Woodwork showrooms in Tokyo and Kyoto, Mr Chan found the kitchen cabinet series to be a good fit for the Hong Kong market with an affordable price level and smaller sizes compared to European brands. The company’s designs are also very modern, which should appeal to Hong Kong customers. Mr Chan also recommended HIRATA Tile Co whose tiles have been gaining popularity among Hong Kong customers.

Mr Chan receives his design inspiration through an ongoing and accumulative process that requires paying attention to his surroundings and doing a lot of reading. He believes interior design is not just about creating a three-dimensional space but also illustrating the essence of aesthetics. Underpinned by this belief, Mr Chan has gone the extra mile to explore architecture – a cross-disciplinary approach that has enriched his sense of multi-dimensions, spatial concepts and aesthetics and helped to further connect his designs with people and life. For Mr Chan, design is an endless learning journey.

Rethinking the way we learn